A Track Record and Reputation You Can Trust 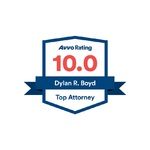 "Dylan and his team are exceptional. You will not be disappointed with the quality of service. I also found his team to be way more reasonable with the cost of their services verse other lawyers I looked at working with. Dylan got me the best possible outcome on my case. I am absolutely thrilled that I chose him and his team to work with for my case."

"Dylan was personable yet professional. He clearly invested himself in my case and successfully got me an outcome better than I had even hoped for. In my misdemeanor assault case, he managed to win me a full dismissal despite the prosecution's persistency. I always found it easy to contact him, and he offered fair and sensible counsel. I would recommend him highly."

"Came highly recommended, exceeded my expectations. Took time to listen, very clear, communicative, honest and upfront, great team around him of motivated professionals. Everything is followed-up on and their support is fantastic. I recommend him without hesitation and with complete 100% support and thanks! Dylan is Bigtime."

"I can't thank Dylan and his amazing staff enough for their hard work and dedication to my case. Dylan is on point, highly educated, and well spoken in court. I would recommend Boyd Law to anyone that is in need of an excellent defense and a stand up lawyer. Boyd Law brought my Class A Felony down to a class D misdemenor before the motion hearing, enough said. Thank you again for all your help."

"I hired Dylan to handle my divorce. Not only was he attentive to all my concerns and questions, but he was very confident and knowledgeable reguarding all the variables presented during this seperation. He worked very hard to ensure that I was prepared and was represented well during my divorce proceedings and I truly feel he had my best interest when giving me legal advice and direction. This divorce was very lengthy and complicated and I'm very pleased with Dylan's performance and would highly recommend his representation."

"I retained Dylan about nine months ago to modify the terms of spousal support. He was extremely detail oriented and meticulous in his research, which made the difference in my case. He was very easy to work with and a solid advocate for me. I would not hesitate to recommend him if someone needs post-divorce representation."

After a successful appeal and re-sentencing, in federal court, our client's sentence was reduced by almost five years.

Attorney Daniel Wentworth won a jury trial, securing not guilty verdicts on all counts, including a felony charge of Aggravated Assault.

The prosecutor dismissed two counts of Aggravated Assault, a Class B felony, and our client pled instead to one count of Reckless Conduct, a Class D misdemeanor, for only a $150 fine.

Our client was charged with OUI with an alleged BAC of 0.28 and a prior conviction within ten years. He was facing, at minimum, a three-year license suspension, a seven-day jail sentence, and more. But thanks to our search for the truth and our effective representation, we won at the BMV hearing and then negotiated a plea deal whereby the OUI was dismissed, and our client pled instead to a charge of Driving to Endanger for only a thirty-day license suspension, no jail, and a fine.

Dylan Boyd won a jury trial, securing a verdict of not guilty to a criminal charge of possession of short lobsters.

We succeeded in getting the prosecutor to dismiss the case against our client, which charged two counts of Aggravated Drug Trafficking, a Class A felony with a minimum sentence of four years, and a forfeiture count, seeking to take ownership of his vehicle. But now, with the case dismissed, our client is in the clear. We were able to leverage arguments that the traffic stop was unconstitutional, that the prosecutor failed to provide additional evidence we requested, and that our client lacked knowledge of the drugs.

At a sentencing hearing in federal court, we convinced the Court to keep our client out of prison and sentence him to probation instead. Under the Sentencing Guidelines, he was facing a prison term of approximately three years. To avoid prison in a federal case is extraordinary. We were able to achieve this result due to our client's excellent progress on pretrial release and also our persuasive sentencing arguments. The Court, for the first time ever in the District of Maine, varied from the Guidelines by setting a lower "marijuana equivalency" ratio for MDMA ("ecstasy"), reducing the ratio from 500:1 to 200:1.

Our client was charged with Arson, a Class A felony, but after diligent defense work, the prosecutor dismissed that charge, and our client instead pleaded no contest to Failure to Control or Report a Dangerous Fire, a Class D misdemeanor, with a sentence of an unconditional discharge, meaning no jail and no fine.

Our client was facing a new assault charge and a probation violation. The prosecutor wanted him held without bail, and the plea offer called for six months in prison. That was unacceptable. So, we successfully argued for his release on bail. Then, we worked with a private investigator to gather additional evidence, which we leveraged to convince the prosecutor to dismiss the assault charge and agree to time served (about ten days) for the probation matter.

We negotiated a plea agreement whereby our client's OUI charge was dismissed up front and a lesser charge of Driving to Endanger would be dismissed in one year provided our client got no new charges during that time.

We successfully defended a client in a protection-from-abuse case, resulting in the court denying the frivolous complaint filed against our client. The opposing party was trying to use the PFA process to gain an upper hand in the parental rights case, but we stopped that from happening.

Our client went from facing four years in prison to only four days in jail. At the start of the case, he was charged with multiple felonies, including Aggravated Drug Trafficking (Class A), which carries a mandatory minimum four-year sentence. But by the end of the case, the prosecutor dismissed all felony charges, and our client pled guilty to two misdemeanor charges for a sentence of only four days (time served) with one year of probation.

Our client had two speeding tickets from two incidents within a short period of time. We got the first one "filed," meaning it would be dismissed in six months if there were no more violations; and we got the second one dropped from 20-24 mph over the limit to only 1-9 mph over the limit.

We successfully defended a client in a protection-from-abuse case, resulting in the court denying the frivolous complaint that was filed against our client.

After extended negotiations and leveraging, the prosecutor dismissed the case against our client, who was charged with Aggravated Assault, a Class B felony.

In an OUI case, we won a contested BMV hearing. Next, we fought the case in court and negotiated a plea agreement whereby the OUI charge was dismissed up front and a lesser charge of Driving to Endanger would be dismissed in one year provided our client got no new charges during that time. The end result would be no license suspension, no criminal conviction, no jail time, and no fine.

The court ruled in our favor on a motion to modify a parental rights and responsibilities judgment. The opposing party sought to modify the 50/50 contact schedule and claim primary residence of the child, but we convinced the judge that there was no basis for that change and that it would be contrary to the child's best interests.

A court granted our motion to suppress statements, based on a constitutional violation, meaning that our client's statements to the police could not be admitted into evidence and used against him at trial. That ruling left the prosecutor with insufficient evidence and caused him to dismiss the charges, which were felonies.

Print | Sitemap
© 2020 Law Offices of Dylan Boyd. The information on this website is for general information purposes only. Nothing on this site should be taken as legal advice for any individual case or situation. This information is not intended to create, and receipt or viewing does not constitute, an attorney-client relationship.
Login