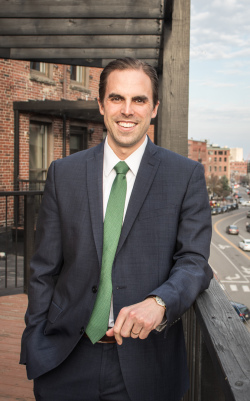 For more than a decade as a Maine attorney, Dylan Boyd has successfully represented clients at all stages of litigation. Inside the courtroom, he has zealously advocated for clients at both jury trials and hearings before judges in both criminal and civil cases. He has also guided clients to successful results outside the courtroom by negotiating advantageous deals and drafting effective legal documents.

Dylan was born and raised in Boothbay Harbor, Maine. He attended the University of Vermont and earned a bachelor’s degree in English in 2006. He returned to Maine to attend the University of Maine School of Law in Portland. During that time, he published an article in the Maine Law Review and served as the journal's Executive Editor; he also gained real world experience at the Volunteer Lawyers Project, Cumberland Legal Aid Clinic, and as a clerk at a local law office. In 2010, he graduated from law school cum laude and was presented with the Outstanding Scholastic Achievement Award for Business and Commercial Law.

Since that time, Dylan has excelled as an attorney in Southern Maine, representing clients in everything from the most serious criminal charges and challenging civil cases to relatively easier matters such as wills and uncontested divorce proceedings. He is also trained and certified as a mediator, focusing on family law mediation.

Dylan is licensed to practice in all courts in the State of Maine and has litigated in courthouses throughout the state, from York to Bangor. In addition, he practices in the United States District Court for the District of Maine and the United States Court of Appeals for the First Circuit. He is a member of the Board of Directors of the Maine Association of Criminal Defense Lawyers. 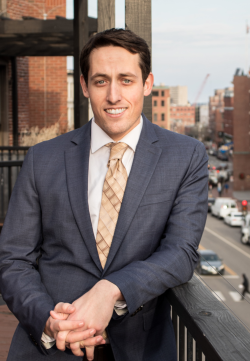 Dan Wentworth was born in Portland, and raised in Sanford, Maine. He graduated from Appalachian State University in 2014, with a degree in History.  In 2017, he graduated cum laude from the University of Maine School of Law. While in law school, Dan obtained a wealth of experience in criminal and civil law. He worked at the York County District Attorney’s Office as a student attorney, negotiating at dispositional conferences, conducting case screenings, and representing the State in suppression hearings and various other criminal proceedings. Additionally, during law school, he was a reserve police officer for the Old Orchard Beach Police Department, where he gained knowledge and experience in law enforcement and the investigative aspect of the criminal justice system. During his final year of law school, he was a student attorney at the Cumberland Legal Aid Clinic, where he represented clients in various criminal and civil matters, including dispositional conferences, federal bail revocations, family matters, protection-from-abuse hearings, civil tort cases, and more.

Dan is a member of the Maine Bar Association and is licensed to practice in both state and federal court in Maine. He has appeared in various courts around the state, including Portland, Biddeford, York, Springvale, Alfred, and Lewiston. Zach Fey was born in Portland and raised in Raymond, Maine. He attended area schools and graduated from Goucher College in 2008, with a degree in Political Science. In 2013, he graduated from the Washington College of Law at American University with a focus in criminal law. While attending law school, Zach participated in the Criminal Justice Clinic representing adults facing misdemeanor charges as well as juveniles and individuals serving life sentences for offenses that occurred when they were juveniles. He also worked for the Mid-Atlantic Innocence Project, investigating potential wrongful convictions in Washington, D.C., Maryland, and Virginia.

Zach is admitted to practice in Maine, including federal courts in the District of Maine, and also in New York. He has represented clients facing deportation before the Immigration Court in Boston. He has appeared in courts around the State of Maine including Portland, Biddeford, Farmington, York, Springvale, Alfred, Lewiston, and South Paris. He is a member of the Maine Association of Criminal Defense Lawyers.

While not working, Zach can be found exploring the Maine coast with his dog, Beans.

Print | Sitemap
© 2020 Law Offices of Dylan Boyd. The information on this website is for general information purposes only. Nothing on this site should be taken as legal advice for any individual case or situation. This information is not intended to create, and receipt or viewing does not constitute, an attorney-client relationship.
Login